This article was originally published in the Director Journal Issue 170, a publication of the Institute of Corporate Directors

Getting It Right from the Start

CEO pay can have significant influence on a company’s performance, how other executives are paid, and how the company is viewed by its employees, shareholders and the general public.

The CEO’s contract, along with the employment and compensation terms and conditions contained therein, is the cornerstone of executive compensation. However, what was deemed acceptable or even best practice at the time of the CEO’s appointment can change significantly over his or her tenure, and become out of step with the market. For example, five to six years ago single-trigger change-of control provisions were common and generally accepted – now, they are considered “poor practices” and widely shunned by the shareholder community.

However, as any experienced director will tell you, changing how a company pays its CEO takes time. Removing such provisions from an existing contract can be challenging and may require trade-offs that may not be worthwhile for the company.

Consequently, and as we have previously discussed in some detail1, the best opportunity for a board to set or reset the direction of a company’s executive compensation will generally come during a CEO transition – when one can begin with something close to a blank slate.

In this article, we lay out various strategies for managing the CEO-succession process to ensure the board arrives at a contract that can attract and retain the right CEO talent, and be effective and defensible to other board members and to shareholders, while setting the standard and tone for all other company executives.

The last few years have given us an excellent opportunity to observe changing CEO pay and succession trends, as 39 of the TSX60 companies have turned over their CEOs since 20082. Here are some of the key trends we have noticed.

CEO talent is not being raided: It is worth noting that none of the 39 appointments involved hiring an active CEO, and only four appointees had previous public-company CEO experience (three had come down from the board and were not active CEOs, and one came out of retirement).

The fact that none of these CEOs was hired away from a CEO role lends support to those who question the need for using relative pay benchmarking to set CEO compensation. (The premise of benchmarking and setting pay against a peer group assumes a competitive talent marketplace.) This observation is consistent with a recent U.S. study which argues that transferability of CEO talent is limited. That study noted that among a sample of 1,200 CEO hires between 1990 and 1998, 27% were outside hires, but only 4% were “raided” CEOs poached from another company.3

Improving talent pipelines - CEOs promoted from within: Major Canadian companies have made good strides in building up their CEO talent pipelines. Among the 39 CEO appointments, only 11 were external hires. This is a positive development as numerous studies have shown that internally promoted CEOs do better on average than CEOs that are hired externally4.

New CEOs earning less than the outgoing CEO: It is worth noting that boards aren’t simply giving the new chief executive “what the last CEO had.” In fact, the pay packages for these new CEOs amounted to significantly less than their predecessors earned, likely reflecting the board’s judgement that a first-time, unproven CEO should not be paid the same as an experienced CEO – a philosophy that should apply in any job.

Excluding the cases where the new or outgoing CEO was a controlling shareholder or member of controlling family, there were 23 first-time CEOs in this TSX60 sample5. Among those 23, only two earned more than the outgoing CEO, while two earned the same amount, and 19 earned less6. Of those CEOs who earned less, the difference was generally substantial – more than 20%.

SETTLING FOR LESS: Target Pay for New, First-Time CEOs versus that of Outgoing CEO 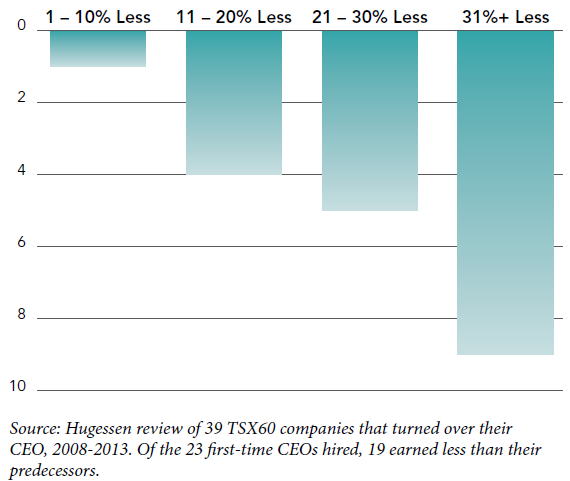 Interestingly, while salaries and annual bonuses for the new CEOs were lower than those of the outgoing CEOs, the biggest reductions in pay occurred in the medium- and long-term incentive (MTI/LTI) bucket. The composition of the MTI/LTI component has also changed significantly, with increasing emphasis on performance-based full-value equity, and less on stock options.

New CEO contracts reflecting better practices: With boards becoming increasingly sensitive to shareholder concerns, it is not surprising that the employment contracts for these new CEOs increasingly reflect practices and policies that are supported and encouraged by the shareholder community, including:

Strategies for managing the CEO succession process and formulating the CEO contract Based on the collective experience of the authors (since 2008, Larry Stevenson has participated in three major CEO transitions as human resources committee chair, while Steve Chan has worked directly with boards on more than a dozen CEO transitions), we offer the following strategies to help directors “get it right” from the start.

1. Internal promotions need not be negotiations

For most internal promotions (whether involving a junior associate or an EVP), the only discussion that occurs after the individual learns of the promotion is to say “Thank you.” The same logic should hold true with a CEO promotion when the board informs the successful candidate that he or she is getting the job – a job that comes with a substantial increase in pay no matter how conservative an approach is taken.

Yet some boards still find themselves negotiating with their own internal candidate. In our experience, this occurs when the board loses control of the process and/or the board names “the” candidate before securing his or her agreement to the contract (giving the candidate leverage they otherwise wouldn’t have).

A proven approach to avoid this scenario is to have internal candidates agree to the board’s proposed terms for the job as a condition of being considered for the CEO role. Essentially, the board could say, “Before you throw your hat into the ring, know that this is how much the job will pay. Any problems?” In an internal CEO promotion, the board needs to appreciate that it holds all the cards.

2. Boards need to take direct control of the agenda for setting the new CEO’s pay and employment terms and conditions

It is important that the board initiate rather than react to the discussion on how and what to pay the new CEO. Otherwise the board risks losing control of the process, and may find itself responding to someone else’s vision for the contract (which becomes the baseline for discussions). So while the board will want to consider the views of various stakeholders, such as management and shareholders, directors themselves need to put pen to paper and formulate the initial offer for the new CEO. Do not delegate the first draft of the contract.

The board will also want to ensure that the compensation data they are relying on 1) is being sourced independently – whether by the directors themselves or by independent advisors, and 2) outlines the full range of compensation options (e.g., current, best and leading-edge practices) – and not just variations of the status quo.

3. A director, typically the chair, should lead discussions with candidates from start to finish.

Some boards will delegate portions of the CEO negotiations to management (e.g., initial discussions, information sharing, the back-and-forth with lawyers, or settling on “final details”), putting managers in the awkward and conflicted position of negotiating with their future boss! All negotiations (even the small details) with candidates should be led by a director, typically the chair, with the support of the chair of the human resources committee. No member of senior management should be a point of contact for the candidate on these matters.

For external candidates, the forfeiture of outstanding incentive awards and pensions at their previous company can be a major item of negotiation, as the forgone amounts can be substantial. Too often, however, there is pressure on boards to “make the candidate whole.” Boards should not feel obligated to match dollar-for-dollar the incentives that a candidate may be walking away from by taking on the CEO role.

In fact, a board should feel some concern when a candidate who has the opportunity to serve as a first-time CEO and earn substantially more money is uncomfortable about leaving some dollars on the table or conditioning any replacement awards on their future performance. That may say something about that individual’s own view of their potential to run the company.

5. Don’t leave the “small stuff” until the end

Too often the details of an agreement (e.g., legal fees, tax advice, moving costs, etc.) are left to be finalized towards the end of the negotiations. Unfortunately, these items can become headaches for the board if they remain open to negotiation after all the major items have been agreed to. The unfortunate result is that many boards have limited appetite to push back on a candidate and risk derailing the negotiations over such minor items – a position some candidates may take advantage of. The recommended approach is to ensure that all these items are detailed in the initial offer.

6. Write the public-disclosure story before approving the final offer

Before it approves the final compensation terms of the contract, ensure the board is provided with a pro-forma disclosure of the summary compensation table (for the CEO) and the associated narrative for the upcoming disclosure periods. This is particularly important where there are significant sign-on/make-whole awards. This step will help the board understand the decisions it is being asked to approve, to ensure that they make sense and are defensible to shareholders.

Steve Chan is an executive compensation consultant and Principal of Hugessen Consulting Inc. He can be reached at schan@hugessen.com

This article was written with the assistance of Camille Jovanovic, Analyst, Hugessen Consulting