Highlights from the 2019 Proxy Season

2018 was a challenging year for the Canadian economy. Trade-related uncertainties brought a decrease in investment spending in the closing quarter, slowing GDP growth to 1.8% in 2018, almost half of 2017’s 3% gain. While early 2019 has brought a broad-based recovery of the TSX, almost every major asset class closed out the calendar year in negative return territory; the S&P/TSX Capped Energy Index delivered the lowest annual returns (-30%) among all major Canadian indices, while the TSX Composite and TSX60 fared better, but still poorly, at -13% and -11%, respectively. 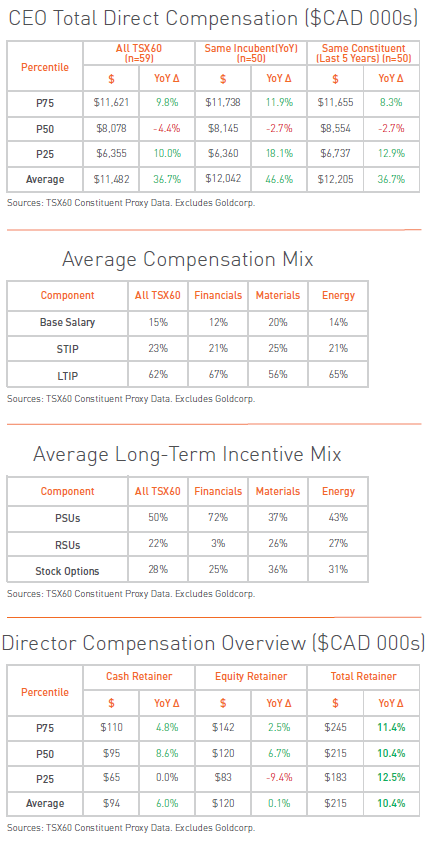 Among the TSX60, median CEO total direct compensation (sum of base salary, annual bonus and grant date value of long-term incentives) decreased slightly by 4%. This follows a substantial increase of 13% in the year prior. Despite the overall decrease, median CEO pay increased in the Energy and “All Other” sectors, and decreased in the materials and financials sectors.

Overall, 2018 saw few major changes to the typical incentive plan design. We are continuing to see companies shifting long-term incentive plan (“LTIP”) mix away from options and towards performance-based incentives. With impending legislation on stock option taxation, the future of stock options in Canadian compensation programs is unclear.

Say-on-pay (“SoP”) support through the 2018 proxy season remained strong with an average support level of 92%, consistent with what we have seen in recent years.

Median director compensation increased by 10.4% to ~$215k in 2018, a more notable year-over-year increase than we have seen in recent years. While the increase is material, it follows a year of no increase in 2017.

While 2018 saw a 4% year-over-year decrease in median pay for TSX60 CEOs, changes in pay varied by sector; the median of the materials sector (which includes mining) and the financials sector declined by 12% and 8%, respectively and increased among energy and companies in other sectors.

Materials saw the largest decrease at median, declining by 12% in 2018. Despite the overall decline, Materials companies saw both increases and decreases in 2018, e.g.:

Energy saw a 6% increase in Median CEO TDC YoY, mainly due to modest and steady increases across the board. Financials decreased by 8% YoY, due to a few companies’ notable changes in TDC, e.g.:

Companies falling into the “all other” category had a mix of increases and decreases in CEO TDC, with increases proving to be more prevalent (median increase of +14%); however, it should be noted that there a few issuers with large changes impacting growth (the largest three increases in pay outlined above are all in this category). For example, CEO compensation at Blackberry in 2018 included a grant of ~$130mm of RSUs and PSUs. If Blackberry is removed from the analysis, summary statistics change as follows:

A more notable trend emerges when observing pay levels for companies that have been in the TSX60 for the past 5 years (“Same Constituent”) and for CEOs that have been in their respective roles for 5 years (“Same Incumbent”). Considering the Same Constituent category decrease of 3% YoY and the Same Incumbent category increase of 7% (notably, boasting a 5% 5-year CAGR), we infer that it has been CEO turnover, more than constituent change, keeping pay relatively stable over the past 5 years.

For the top 5 named executive officers (“NEOs”), total pay at median increased by 11% to $23.2mm, with companies paying more for executive leadership in 2018.

This table shows median CEO pay as a multiple of median NEO pay. 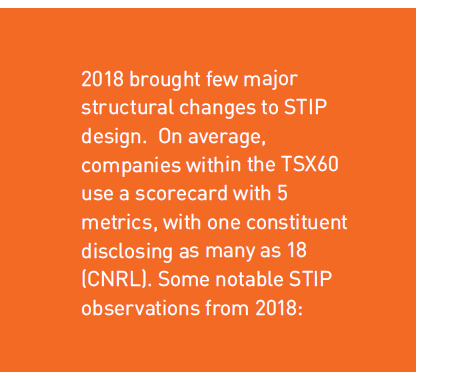 Average target LTIP mix saw little change from 2017. We continue to observe the gradual decline of options and increase of PSUs in the LTIP mix, which could be expected to continue further based on potential changes to stock option tax treatment proposed by the federal government – further details provided in the regulatory and disclosure update section.

Despite the general consistency year-over-year, we note the following notable changes to incentive plan design in 2018: 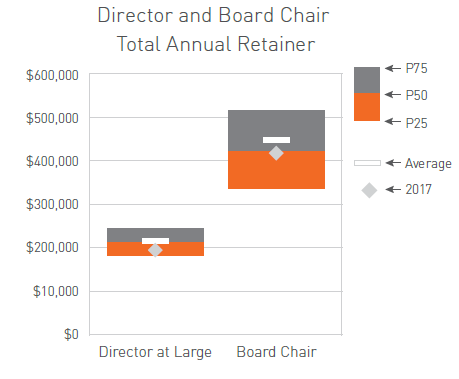 Approximately 70% of TSX60 companies have adopted a flat fee structure by which directors do not receive meeting fees, an increase from approximately 60% last year. Flat fees have gained traction and support from shareholders as a more appropriate structure of compensation for directors of Canadian Boards. As the role of the director has expanded, paying a fee “per meeting” is less likely to appropriately reflect the ongoing manner in which directors increasingly serve boards.

2018 SoP results are shaping up to be in line with recent years in terms of average support levels.

With 65%1 of shareholder proposals related to ESG measures this year in Canada thus far, commitment to addressing ESG risks and opportunities continues to be an important topic for Canadian Boards. Though it may be early days in Canada, we have seen leading companies outside Canada adopt ESG measures into their compensation programs, for example: 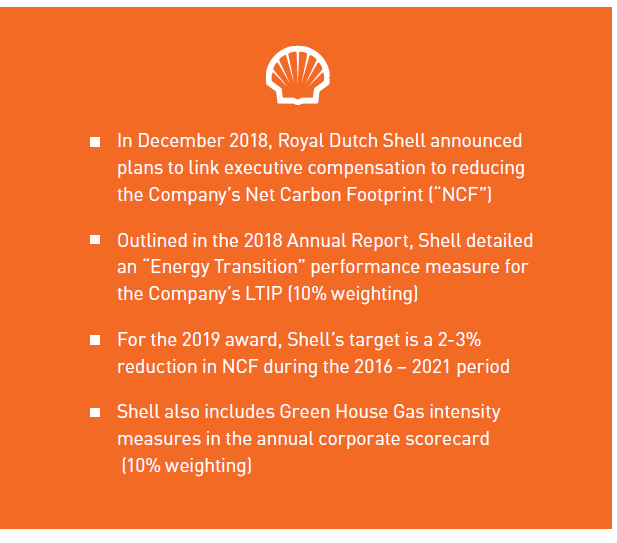 Typically, when E&S factors are measured for purposes of executive pay, we tend to see a bias towards the inclusion of environmental factors where the output is generally easier to measure; social matters prove far more difficult to measure and include a wide range of subjects such as health and safety, diversity, community relations, indigenous relations, human rights, etc.

While the inclusion of E&S factors in incentive design is an effective way to address pertinent E&S risks, we encourage Boards to consider how E&S most
appropriately fits into company corporate strategy and executive oversight before adding metrics to incentive plans.

Retention Awards in the TSX60

While generally on the decline, companies in the TSX60 continue to use one-time awards.

The Emergence of Canadian Cannabis

2018 was a flagship year for the Canadian cannabis industry, with federal legalization of marijuana this past October. Market capitalizations of many cannabis companies have become substantial, notably, Canopy Growth currently sits at a market cap of $19.6B, and formally entered the TSX60 in April 2019.

The sector’s fast and substantial growth provides an interesting case study for an industry developing executive compensation practices and standards from the ground up. From a governance perspective, we see cannabis companies generally working to move up to the governance practices expected of large Canadian companies while simultaneously navigating the challenges of being a high growth “start up” in an emerging industry. While the emergence of cannabis has some unique aspects as a newly legalized industry, from a pay perspective, many characteristics are shared with prior booms such as tech in the late 1990s and oil and gas in the early 2000s. Namely, similarities include tough labour markets amid a rush to hire employees and implement pay plans within very tight time constraints.

In some notable cases, high compensation levels have made headlines, particularly regarding stock option grants made to executives and directors. Beyond the issue of pay quantum, we also have seen high levels of equity dilution and burn rates in companies operating in cash-constrained contexts.

Ultimately, the industry is still in early stages, and although we expect compensation and governance practices to eventually catch up to investor expectations, for now we see companies dealing with the “growing pains” of transitioning from the start-up phase to large, established companies.

The Evolving Role of Shareholder Activists

In 2018, shareholders played a more active role than ever, with 752 instances of Canadian companies being subjected to public demands. Topics of engagement often relate to topics such as board composition, governance items, compensation, M&A and company strategy. Companies most susceptible to shareholder demands are often under-performing, widely held companies. In 2018, performance appears to be one of the largest factors making companies vulnerable to the efforts of activists (37% of targets were in the materials sector).

Proposals for regulatory change relevant to Canadian Boards have emerged in 2018, via (i) Bill C-86, (ii) proposed changes to the CBCA, and (iii) amendments to option taxation law. While no legislation has been formally approved, Boards should be aware of the proposals and their implications.

Bill C-86 outlines changes that would mark the most significant amendments to the Canadian Labour Code in decades. The bill includes the “Pay Equity Act” which will require employers to establish pay equity plans within 3 years. Companies with unionized workforces and large employers would have to establish a pay equity committee. The bill would also require more compliance for group terminations, requiring employers to provide at least 8 weeks notice of termination, and pay in lieu of provided notice.

Proposed changes to the Canadian Business Corporations Act (“CBCA”) specify that when directors and officers are acting in the best interests of the corporation, this includes the consideration of the interests of shareholders, employees, retirees and pensioners, creditors, consumers, governments and the environment. The changes would also require that shareholders of prescribed organizations be provided a non-binding “say-on-pay” vote (not currently enforced by law).

2019 Federal Budget proposed changes to stock option taxation announced the intention to limit the use of the current stock option regime. Current tax rules provide employees with preferential personal income tax treatment by means of a stock option deduction. Due to results of a 2017 analysis showing a disproportionate amount of the benefit being recognized by employees with annual income over $1mm, the government has proposed to limit the benefit for high-income individuals at “large, long-established, mature firms” by applying a $200,000 annual cap on the number of options that would attract capital gains-like tax treatment; any additional value granted above this amount would be subject to regular income tax rates. The new rules apply to grants made after December 31, 2019. Note this timing differs from the intent of the Federal Budget which stated the effective date would be the timing of the draft legislation expected before the summer of 2019.

2018 marked a year of economic uncertainty, challenging times for Canadian equities and ultimately, general flattening in CEO pay. Looking forward to 2019, we will continue to monitor where Canada falls in the global economic narrative, and implications for executive compensation and governance.

We continue to see companies under ongoing shareholder scrutiny regarding matters of value creation, governance and environmental & social impact. Shareholders are holding Boards and Committees to increasing standards, and through initiatives like the proposed amendments to the CBCA, federal policy is paving the way for them to do so. Discussions around diversity and E&S are a fixture of boardroom agendas, and although much action in this space today is voluntary, the future is likely to hold regulatory requirements. 2019 marks a time for Canadian companies to decide where they stand on these issues, and whether they will lead with better practices today or comply with potential requirements later.