In an environment where investors, public and private, big and small, are placing mounting pressure and expectations on Canadian companies, corporate directors are on the frontlines. Topics such as sustainability and social issues are slowly making their way into the boardroom, and to some extent into incentive plans, while IT risk mitigation and cybersecurity remain top-of-mind across industries as companies adapt to digital forces.

This survey draws out prevailing topics and analyzes the results to understand how industry, company size, and even director tenure, are driving perspectives and practices.

In 2016, Hugessen Consulting undertook our first Director Opinion Survey, gathering insights into many top-of-mind issues for directors going into year-end. This year, we invited Canadian directors of public and private for-profit companies to participate in our 2018 survey refresh, where we asked for thoughts on a range of topics, from boardroom priorities to executive compensation and performance issues, to governance trends. This refresh captures current sentiments, changing opinions over time, and thoughts on a few new topics. The 97 survey respondents represented a broad range of industries, geographies, director experience, and company size. 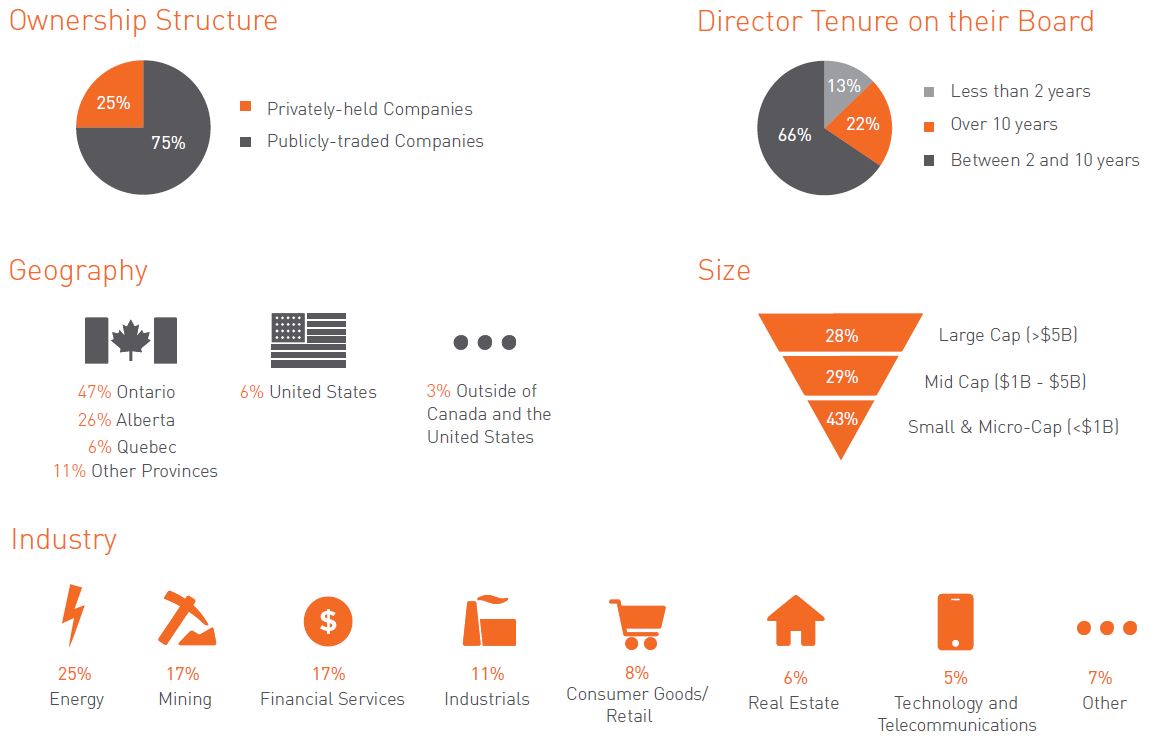 We began by asking directors to rate boardroom priorities for the upcoming year. Unsurprisingly, corporate strategic planning was the highest priority, followed by talent management and succession planning. While these results largely echo the sentiments of directors in 2016, there was a notable upward shift in focus on risk management and cybersecurity. In 2016, directors ranked risk management and cybersecurity as the lowest priority (but requiring the largest increase in attention), while this year it is ranked as the third-highest priority. This shift is likely a result of the multiple high-profile cyberattacks in recent years and a general increase in awareness of data privacy issues. Diving deeper into the respondent demographics, we note that talent management and succession planning and executive compensation were ranked as a much higher priority by public issuers and large-cap companies.

In our experience, we find that setting appropriate performance targets is one of the most challenging tasks for directors; a view seconded by directors themselves, who indicated it was the most difficult element of executive compensation. On the flip side, very few directors indicated that managing proxy advisor influence or say-on-pay pressures were a challenge, other than those in the mining space (36% of mining directors indicated that these topics were very challenging, versus 19% overall).

One-time awards can sometimes draw the ire of shareholders, depending on the purpose of the award and the accompanying disclosure. In the past, we’ve seen institutional shareholders, such as CPPIB And Ontario Teachers, publicly denounce the liberal use of certain one-time awards. This year, 57% of directors reported that their board issued one-time awards outside of their regular incentive framework to executive officers, a notable increase from 39% in 2016. The majority of those awards were performance or transaction-based, consistent with 2016 results. We note that there has been a significant increase in retention-based awards, from 13% of those who granted
one-time awards in 2016 to 31% in 2018. We typically advise that retention awards be used very selectively; for example, they may be used to retain key talent through a truly transitional period at the company. Also, we recommend providing fulsome disclosure on the award rationale in the proxy circular.

Another rising focus among investors and directors alike are Environmental, Social and Governance (ESG) issues. These encompass several topics including environmental sustainability, diversity, and human rights. We found that 93% of mining company directors are considering the use of ESG metrics (excluding safety metrics), which is significantly higher than any other industry. However, most directors (60%) are not considering ESG metrics at this time, which speaks to the challenges associated with incorporating these types of metrics into incentive plans (what takes priority, how to measure, etc.). When asked about boardroom priorities more broadly, 48% of large-cap directors stated that ESG was very important, compared to 29% of small cap directors. As with most governance changes, large-cap companies will likely lead the charge on ESG metric adoption.

Directors reported that they are generally satisfied with the link between their company’s pay and performance (defined as long-term shareholder value growth), with 58% indicating a very close alignment, an increase from 45% in 2016. Only 6% of directors reported strong dissatisfaction with the linkage between pay and performance. Interestingly, we observed that 73% of financial services directors and large-cap directors believe their companies have very close pay-for-performance alignment, compared to only 47% of small-cap directors and 29% of mining directors.

Given the increasing social focus on income inequality and its impact on a company’s “social license to operate,” we asked directors if income inequality had been discussed at the board level. We found that 46% of directors had discussed the topic with their board, but 68% of those discussions did not lead to any relevant implications. Where the board did take action, the discussion often led to a greater focus on setting executive pay levels. This emerging trend is an interesting consideration when going into year-end pay decisions, given the ever-heightening scrutiny of executive pay and pay ratios.

Proactive shareholder engagement has become the norm for many public issuers, with 43% of directors indicating that their board actively communicates with the governance departments of their institutional shareholders on executive compensation, performance, and governance issues, compared to only 22% in 2016.

This year, we asked directors how long they had served on their boards. We found that directors that had served on their board for less than 2 years faced a different set of challenges than their longer-tenured counterparts. Overall, the newer directors ranked compensation challenges as more difficult, particularly in terms of annual pay adjustments and equity usage. This highlights the importance of director onboarding and ongoing director education, to ensure directors feel equipped to tackle their responsibilities.

We also noted a difference in the perspectives of newer and longer-tenured directors:

As companies head into year-end, now is a critical time to reflect on the past year and prioritize for the year to come. Investor pressures amid relatively stable markets (apart from the past two months) and have encouraged many boards to focus their attention on topics that have received less airtime in the past, such as diversity and sustainability. All this, while navigating the ongoing challenge of linking pay to a constantly evolving definition of performance. Directors are aware of these challenges and are stepping up to engage on new issues and embrace a changing marketplace.