As boards face increasing scrutiny from investors, regulators and other stakeholders, director priorities and board practices are forced to adapt accordingly. Tracking prevailing views on boardroom issues provides valuable insights going into year-end decision-making. For example, directors recognize that issues like IT risk mitigation and talent management require increased focus. Meanwhile, executive compensation and shareholder engagement continue to play a fundamental role in how companies execute and communicate their strategies. In an effort to keep an ear to the ground in the director community, we created a survey to gauge directors’ opinions on hotbutton issues and their companies’ practices over the past year.

We look forward to sharing our results!

In early November 2016, Hugessen asked Canadian directors of publicly-traded and privately-held for-profit organizations from a range of industries to complete an online survey. The survey asked for participants’ views on a variety of prevailing executive compensation and related performance and governance topics. Of the 161 respondents, there was broad representation across geographies, ownership structures, industries and company size (based on market capitalization).

We begin our survey in the boardroom, to gauge how directors view a range of topics at the forefront of any corporate agenda (Figure 1). As one would expect, corporate strategic planning tops the list as companies face the continuous struggle of forging their path in the face of competitive forces. Natural resources (energy + mining) and FIRE (financial institutions + real estate) company directors, as well as small- / micro-cap firm directors rank this number one at a notably higher rate than other industries / company sizes.

Although IT / cybersecurity ranks low on relative importance, the recent flurry of high-profile breaches has caught the attention of Canadian directors. More directors identify it as requiring increased attention from the board in the coming year than any of the other topics. Large-cap and FIRE company respondents drove these results.

As we typically observe, directors found the

process of setting appropriate annual performance targets the most challenging aspect of the annual compensation process, with 79% indicating it is moderately or very challenging (Figure 2).

Determining the appropriate balance between quantitative and qualitative metrics, and calibrating objectives (at target and “stretch”) so they are challenging yet realistic, are pertinent issues all companies struggle with. Particular challenges arise in “lower and slower” growth environments, such as those facing natural resource industries, where it becomes difficult to justify lower targets versus last year’s results. Key steps in an efficient and successful process include confirmation of alignment to the short-term operating plan and longer-term strategy, stress-testing any changes to metrics or calibration, and ensuring complete and objective information is made available when making decisions.

The application of discretion by Boards / Compensation Committees (for both annual bonus payout and long-term equity grant determinations) is a key discussion point in boardrooms across the country – should you stick with the formulaic result, or apply discretion based on other factors? We found a vast majority of Boards (81%) did not stick with the purely formulaic result, and adjusted the formula-based payout either within a discretionary range built into the framework (64% of those that did adjust), or in the absence of a predefined range (36% of those that did adjust) (Figure 3).

Discretion was applied less frequently for long-term incentive awards, with 38% of Boards sticking with the “target grant amount” (Figure 4). Publicly-traded companies and small- / micro-cap both used discretion at approximately twice the rate of their privately-held and large-cap counterparts. 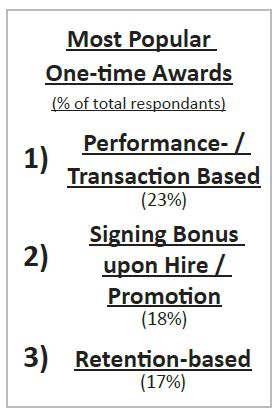 for a variety of reasons including rewarding exceptional performance, retention purposes or at executive sign-on, have begun to pop up on the radar of major institutional investors and proxy advisors. Nearly three quarters of directors surveyed were aware of this trend, highlighted by a joint study conducted by CPPIB and OTPP on “outside-of-plan” compensation awards in 2015. While not overtly critical of the awards, the pension plans emphasized the need for clear rationale on how the structure and quantum are determined, particularly if they are not performance-conditioned.

When asked about their own company’s practices, 40% of directors surveyed said their firms granted one-time awards in the past year. The most popular one-time awards were performance- / transaction-based, followed by signing bonus and retention-based awards. Alberta had the lowest use at just over 20%, compared to 50% in Ontario.

Pay-for-performance (P4P) sits as one of the foundational concepts behind modern executive compensation design. Incorporating business performance into pay frameworks, particularly through the use of long-term equity awards, ensures that pay outcomes are better aligned with the shareholder experience. In situations where a P4P disconnect emerges, storm clouds begin to form – many proxy advisor AGAINST recommendations, be it for Say-on-Pay or director elections, are a result of such misalignment.

Directors surveyed were generally satisfied with their companies’ P4P alignment over the past 3 -5 years, as measured by long-term shareholder value growth (Figure 5). Responses were split between very close alignment (45%) and moderate alignment (48%), with 7% responding as dissatisfied.

Breaking down the results between geographies, ownership and company size offers interesting findings. For example, large-cap company directors were generally more satisfied with P4P alignment; in fact, no large-cap directors responded with dissatisfaction. Meanwhile, publicly-traded company directors were more satisfied than their privately-held counterparts. There was also no dissatisfaction from directors outside of natural resources and FIRE companies.

While many corporate directors are comfortable with P4P alignement, the results indicate there is certainly room for improvement, particularly for mid- / small-cap organizations.

We also asked how to effectively increase P4P 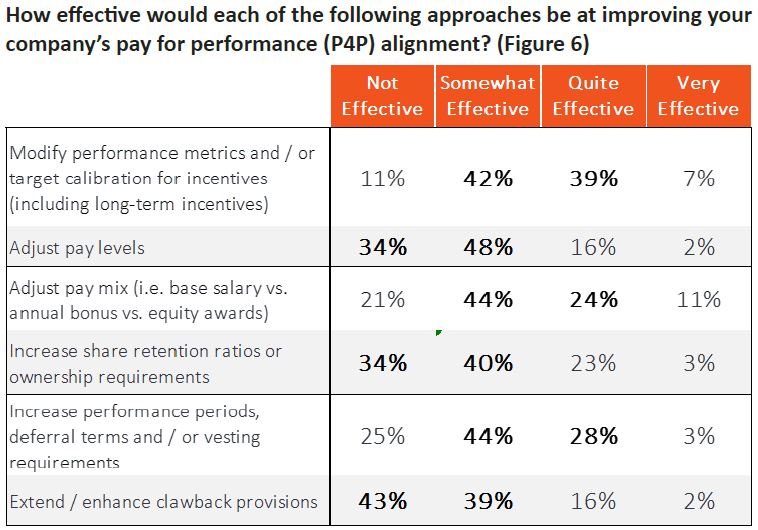 alignment (Figure 6). Modifying performance metrics and / or target calibration stood out as the most effective method – nearly half of directors think it is quite or very effective. Extending / enhancing clawback provisions and adjusting pay levels were viewed as the least effective methods. 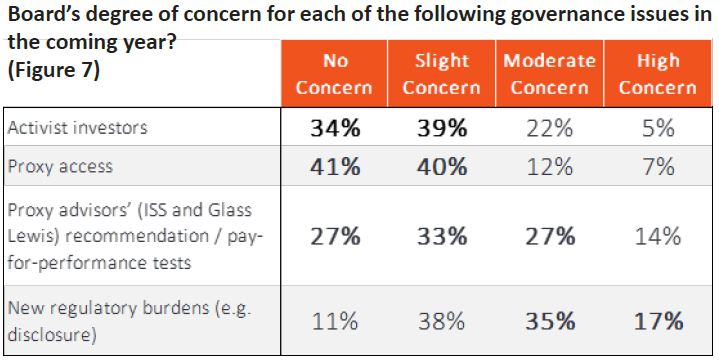 Moving into related governance topics, we observe modest concern for a range of issues, and broad prevalence of shareholder engagement activity and gender diversity initiatives at the board level.

Respondents view new regulatory burdens as the most concerning governance topic, with just over half of directors indicating moderate or high concern (Figure 7).

Direct engagement by board members with the 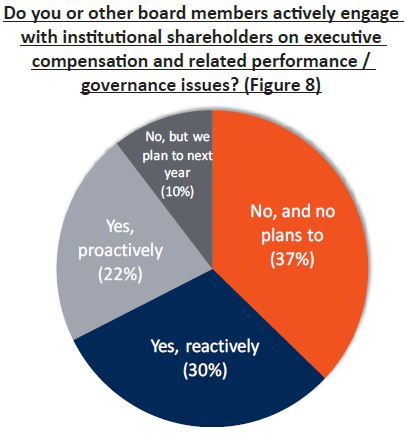 governance departments of institutional investors has markedly gained traction over the past several years. Increasingly influential proxy advisors and the ever-present threat of activist investors has advanced the need for an open dialogue with major shareholders on a broad range of topics beyond financial results.

Over 40% of directors surveyed indicate board members at their companies currently engage with institutional investors on executive compensation and related performance / governance issues (Figure 8). Of those, 58% do so on a reactive basis, and the remainder do so proactively. Approximately 10% say they plan to in the coming year. As expected, large-cap companies conduct or plan to conduct engagement at over twice the rate of small- / micro-cap companies (74% versus 33%).

Over the past decade, Canadian boards have 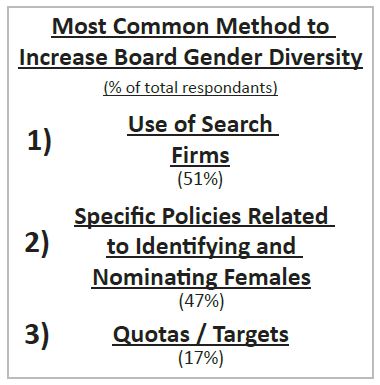 made slow but steady progress on the issue of gender diversity. Recent initiatives to accelerate this progress include the “comply or explain” securities law rule amendments. Translating this into tangible advancement has resulted in the use of measures to enact systematic change.

Over 60% of directors surveyed indicated their boards are actively looking to increase gender diversity. The most common mechanism these boards are using are search firms (51%), followed by specific policies related to identifying and nominating female directors (47%), quotas / targets (36%) and director term limits (26%).

Directors offered valuable insights into how their companies are navigating the complex realm of executive compensation and related governance. The wide range of responses gathered reinforces the notion that there is no “right” answer to any of the issues discussed in the survey. While directors are generally satisfied with how their pay programs are operating, they acknowledge that many aspects of the process are challenging, some more than others. Every company makes informed decisions based on a variety of internal and external factors, and our hope is that studies such as this one can be another tool in the toolbox to generate discussion and engagement.

For those with questions or who are interested in more in-depth and customized analysis, please contact John Skinner (Toronto) or Erin Poeta (Calgary).