Highlights from the 2018 Proxy Season

2017 saw the Canadian economy deliver surprisingly strong growth, marking Canada as a standout performer among OECD countries with 3% GDP growth. While this is the fastest pace of growth since 2011 and significantly outpacing 2016’s 1.4% increase, Canadian equities were one of the weaker performing markets in 2017. The S&P/TSX Composite’s 9.1% total return, while still respectable, lagged international indices due to a cooling housing market, continued difficulties with market access in the energy sector and strong performance in the US technology sector. 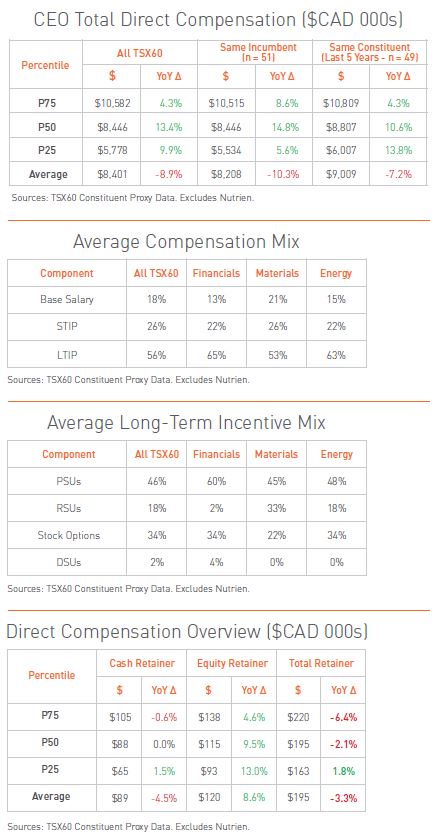 Median CEO total direct compensation (sum of base salary, annual bonus and grant date value of long-term incentives) levels trended upwards with the Canadian markets in 2017, increasing 13% year-over-year to $8.4M. This was largely led by the Financials and Materials sectors, posting 9% and 21% year-over-year increases at the median, respectively. Energy sector CEOs and CEOs in other sectors remained relatively flat with a -3% decrease to median pay levels.

Overall, 2017 saw few major changes to the average structure of incentive design. The results are mixed on a case by case basis, with two issuers introducing stock options into their incentive mix and two others increasing emphasis on PSUs or eliminating stock options entirely.

Say-on-pay support through the 2018 proxy season remains strong among the TSX60 with an average support level of 92%.

Director compensation changed little year-over-year, with the median total retainer decreasing -2% to $195K. The decrease is at least partially due to a stronger Canadian dollar, reducing the CAD value of director pay delivered in USD.

There has been significant media attention regarding the ratcheting up of pay, mostly in the U.S. Looking back at the 2013 - 2016 period, we see that Canadian CEO pay was relatively flat. We expect this is a result of two main drivers: the downturn in the energy sector and a fair degree of CEO turnover with newly appointed executives having pay packages set lower than their predecessors. 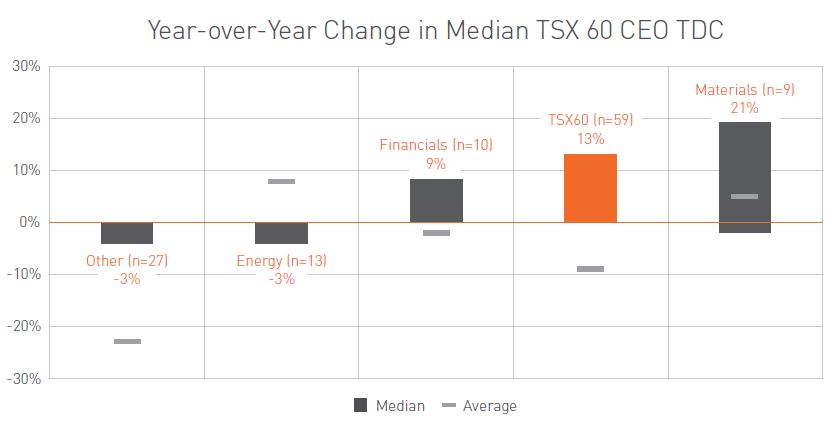 What appears to be a 3% decrease in “all other” is attributed to large CEO pay differences in a few companies, particularly in pharmaceuticals. Some changes were so large that it has skewed the average down significantly. Median sits at -3% but the average decline is -23%. 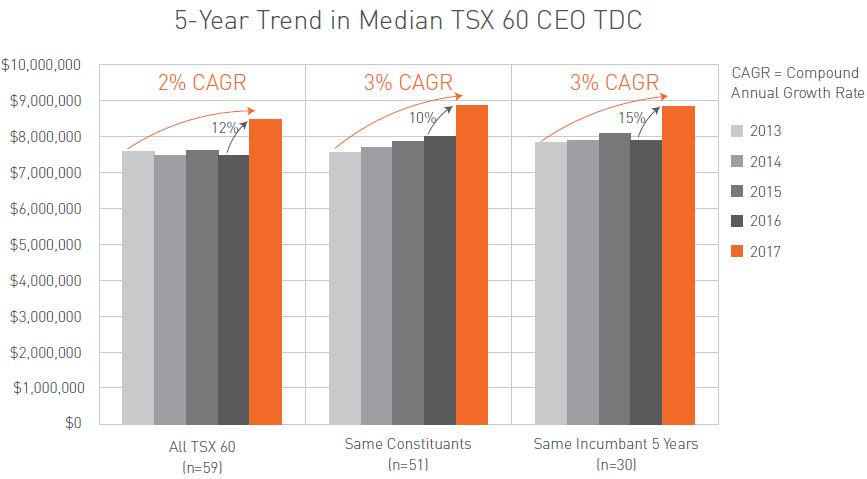 2017 brought few major structural changes to short-term incentive plan (“STIP”) design. On average, companies within the TSX60 have 5 metrics in their scorecards, with one constituent disclosing as many as 17 (Inter Pipeline). Some notable STIP observations from 2017: 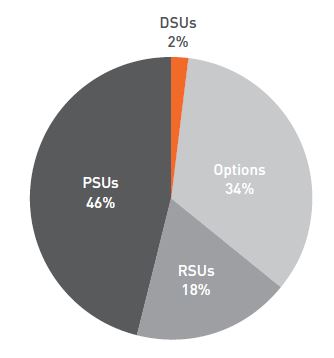 In past years we have seen an increased use of relative TSR, which we expect is a result of more companies adopting PSU plans, rather than existing PSU plans being amended.

With the adoption rates of PSU programs reaching maturity over the past few years, a broader trend is emerging in LTIP design, which is a shift away from sole reliance on relative measures (e.g., 100% relative TSR) towards the addition of strategic/absolute measures.

We note that institutional shareholders have been advocating for more emphasis on absolute performance measures in long-term incentives – more recently in resource industries in particular – in order to focus management teams on generating positive returns, rather than strictly peer outperformance. For example, Ontario Teachers’ Pension Plan recently published a recent article aimed at the oil and gas exploration and production sector, suggesting companies should place more focus on return-on-equity or like measures and absolute TSR in incentive programs.

The median total non-executive director annual retainer (including equity) decreased 2.1% in 2017 relative to 2016 to approximately $195K, while the median Board Chair total retainer fell 1.1% to at $420K.

Consistent with 2016, approximately 60% of the TSX60 has adopted a “flat fee” structure whereby directors do not receive per meeting fees.

2018 say-on-pay results are shaping up to be in line with recent years, both in terms of average support levels and the occurrence of high-profile failures.

Direct engagement by independent directors with major institutional shareholders and proxy advisors is becoming a regular part of a director’s role among the largest issuers in Canada. Formal interaction with shareholders is a natural complement to an issuer’s disclosure of compensation practices, allowing institutions to gain the appropriate context to make the most informed voting decisions.

Some of the most extensive campaigns are of course undertaken by issuers who received poor SoP support at their 2017 AGMs (e.g. CP), or faced proxy challenges (e.g., Crescent Point). Also, boards/issuers who have historically had high levels of support are finding interesting ways to hold productive discussions between directors and shareholders

While Canada saw little change in the regulatory environment, 2018 marks the first proxy season where the SEC requires public companies to report the ratio of compensation of their CEO in comparison to that of a median employee.

Proxy disclosure continues to evolve as shareholders and proxy advisors increase expectations for the clarity and comprehensiveness of disclosure. Supplemental and voluntary “realized / realizable” pay analyses continue to increase in prevalence with approximately 50% of the TSX60 constituents.

2017 provided support to the widely-held notion that executive pay levels continue to ratchet higher following minimal change in the median pay levels over the past five years. While the growth in the Canadian economy outpaced expectations in 2017, with CEO compensation largely following the same track, a cooler outlook for 2018 may thwart the upward pay trend before it can start.

Companies continue to refine the balance between evolving shareholder interests and definitions of success. We are seeing a shift in shareholders’ focus over the last year, with increasing discussion on environment, social and governance issues such as diversity, climate change and gender based pay transparency. These issues bring a new level of complexity in performance evaluation and change management that directors will need to address.

Lastly, we continue to witness examples of how focused, direct and proactive engagement with shareholders in advance of major program changes, in the face of a tough performance environment, or even in the normal course, can result in successful support of a company’s approach towards executive pay. Conversely, the failure to provide appropriate disclosure or properly engage, or the appearance of being insensitive to shareholder priorities, can easily catch not only shareholders’ ire, but the public’s as well.