TSX60 & Board Gender Diversity: Diversity Policies and Female Representation on the Boards of Canada’s Largest Companies

Gender diversity (or lack thereof) is a hot topic in corporate Canada. For years, Canada’s largest companies have devoted time and resources to find effective ways to develop, retain, and promote female talent across all levels of their organizations. Despite these efforts, and Canada’s status as a global leader in women’s equality, the representation of women at the most senior levels of business remains far from parity.

The economic case for gender equality (in society and in business) is compelling – in June of this year, McKinsey & Company released a study showing that advancing women’s equality in Canada has the potential to add $150 billion in incremental GDP over the next 10 years.[i]

Gender diversity is on the list of “governance hot topics” among Canada’s institutional shareholder community. While this has long been an area of interest for shareholders, it is increasingly becoming a priority in these groups’ discussions and engagement with major Canadian corporations. This is evidenced by an increasing number of shareholder proposals asking for the adoption of formal gender diversity policies and/or quotas.

In recognition of the persistent gender gap, and the significant value potential in closing it, various jurisdictions have taken legislative and/or regulatory action to increase gender diversity in the corporate world – with particular focus on boards of directors and executive management teams. To this end, Canada has taken a “comply or explain” approach; since December 31, 2014, the Canadian Securities Administrators (CSA) has required that companies listed on the Toronto Stock Exchange (TSX) disclose annually whether they have introduced a gender diversity policy at the board and executive officer levels. Numerous European countries (e.g. Norway, France, Germany, Italy, Iceland, and Belgium) have gone further and introduced legislated quotas mandating minimum levels for representation of women on corporate boards.[ii] Here in Canada, while not required under the current regulations, there are increasing examples of companies voluntarily adopting specific targets or quotas for female representation on boards and executive management teams.

BOARD GENDER DIVERSITY POLICIES AND TARGETS

As of the latest disclosure, twenty-eight of the TSX60 companies (47%) disclose that they have adopted a formal target (i.e. quota) for women representation on their boards; eighteen issuers (30%) have adopted a formal board diversity policy, but no specific target for the proportion of women directors; and fourteen (23%) disclose that no board diversity policy exists.

Since the previous year’s disclosure, there was an increase of six TSX60 companies with a formal gender diversity target. All of these six companies had previously adopted formal diversity policies, but had not specified a target.

In 2017, the financial services industry had the 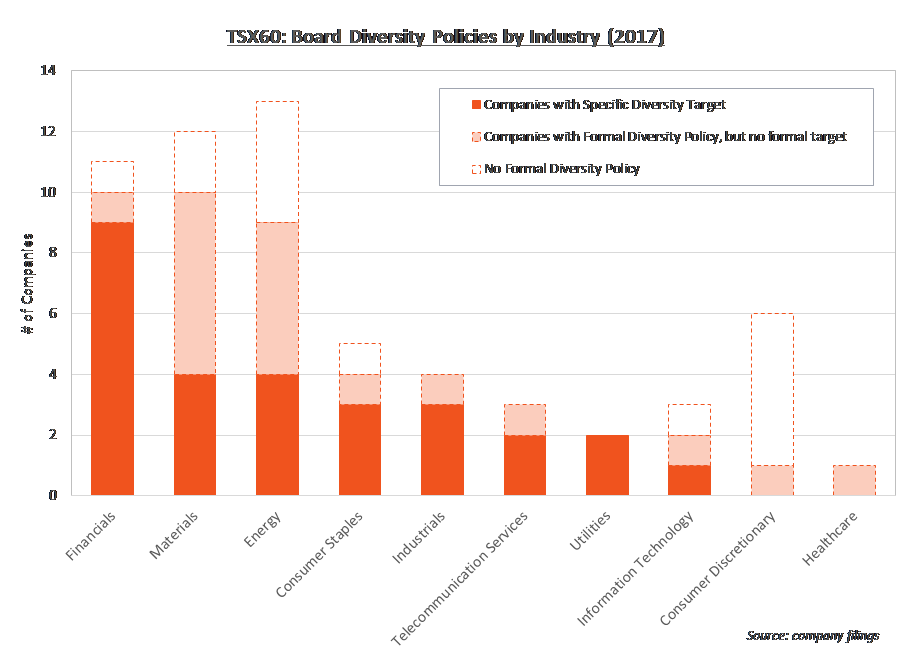 How Tough are Gender Diversity Targets? 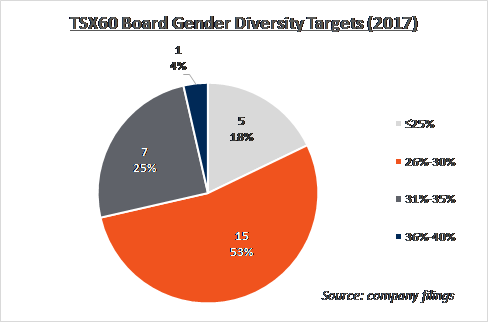 among TSX60 companies, the most common objective falls between 26% and 30% for female representation on the board – fifteen issuers have a target in this range. Five organizations have a target less than or equal to 25% and seven have a target between 31% and 35%. One company, Yamana Gold, adopted a board gender diversity target of 40% in 2016, and 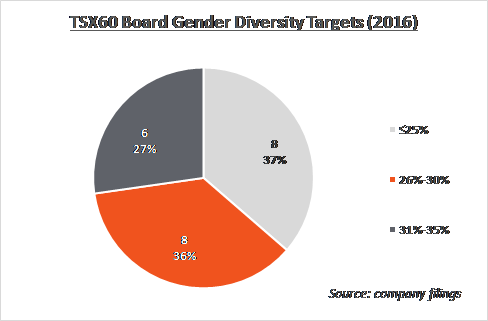 disclosed that it anticipates being able to achieve the goal before the 2018 annual meeting of shareholders.

Year-over-year, gender diversity targets among TSX60 companies have become more stringent, on average. In 2017, the weighted average of all targets was 29.9%, a slight increase from 28.8% in 2016. This was driven by a few organizations increasing their targets from 25% to 33% of the board.

In 2016, fifteen issuers with targets (68%) had met or exceeded their goal. In 2017, that number increased to twenty-two (79%). In 2016, companies who had not yet met their targets were about 4% below their goal. Interestingly, in 2017, that number increased to about 7%. This is largely attributable to both an increased number of organizations adopting quotas, and other organizations raising their targets year-over-year.

So, what happens to organizations that fail to meet their own self-imposed gender diversity targets? In Canada, since the adoption of a formal target remains voluntary, the answer is, nothing. The majority of issuers with targets stated that, in the event they fell short of meeting their goal, diversity would be taken into consideration in any upcoming director nominations. Contrast this to Norway, where the penalty for not complying with legislated gender quotas is drastic – companies can be denied registration as a business enterprise and be subject to forced dissolution by the courts. So far, no Norwegian company has been sanctioned in this manner.[iii][iv]

Why Not Have a Gender Diversity Policy or Target?

The CSA’s current “comply or explain” regime requires issuers to include diversity disclosure, regardless of whether a policy and/or target have been adopted. For those TSX60 companies that have not adopted a formal diversity policy, they must include their reasoning for not doing so.

The most common reasoning articulated by companies without formal targets is that targets are arbitrary, and setting an arbitrary number will not serve the Board’s interests. Other companies view targets as restrictive, and dislike the lack of flexibility they provide in nominating new directors. Some companies without targets state that they will be able to achieve an “appropriate amount of female representation” without needing to set formal goals. However, without a formal policy or target, it is not always clear as to what “appropriate” means.

For organizations with no formal diversity policy, companies typically disclose the fact that they do focus on diversity, and recognize its importance, but will frequently note that a policy is not required to reinforce Board culture and select candidates from diverse backgrounds.

Based on the latest disclosure by TSX60 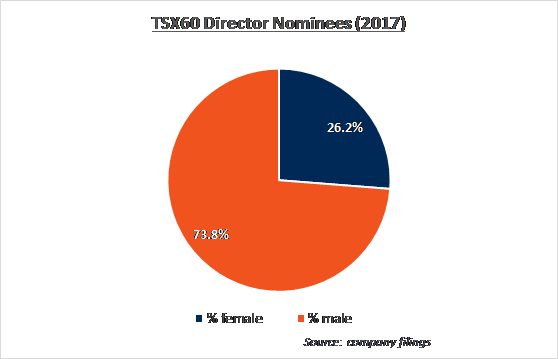 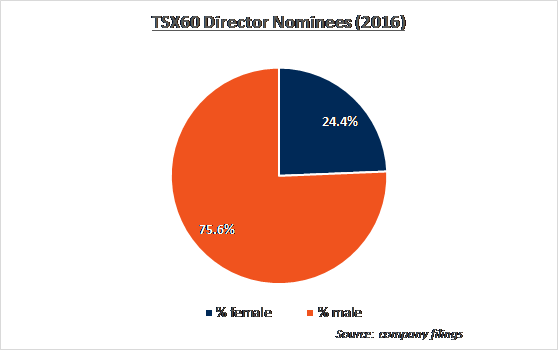 Saputo Inc. leads the TSX60 with 50% of its board seats held by women, and Canadian Imperial Bank of Commerce has the highest number of women on its board at six (38%). As of this year's annual general meetings, there are two companies in the TSX60 with no women on their boards (Constellation Software Inc.* and First Quantum Minerals Ltd.); and over one-third of the TSX60 (n=21 companies) have two or fewer women on the board.

See chart below for further details by company.

*Note: in 2017, Constellation Software received a shareholder proposal asking for the adoption of a formal board diversity policy; the proposal received 42% support 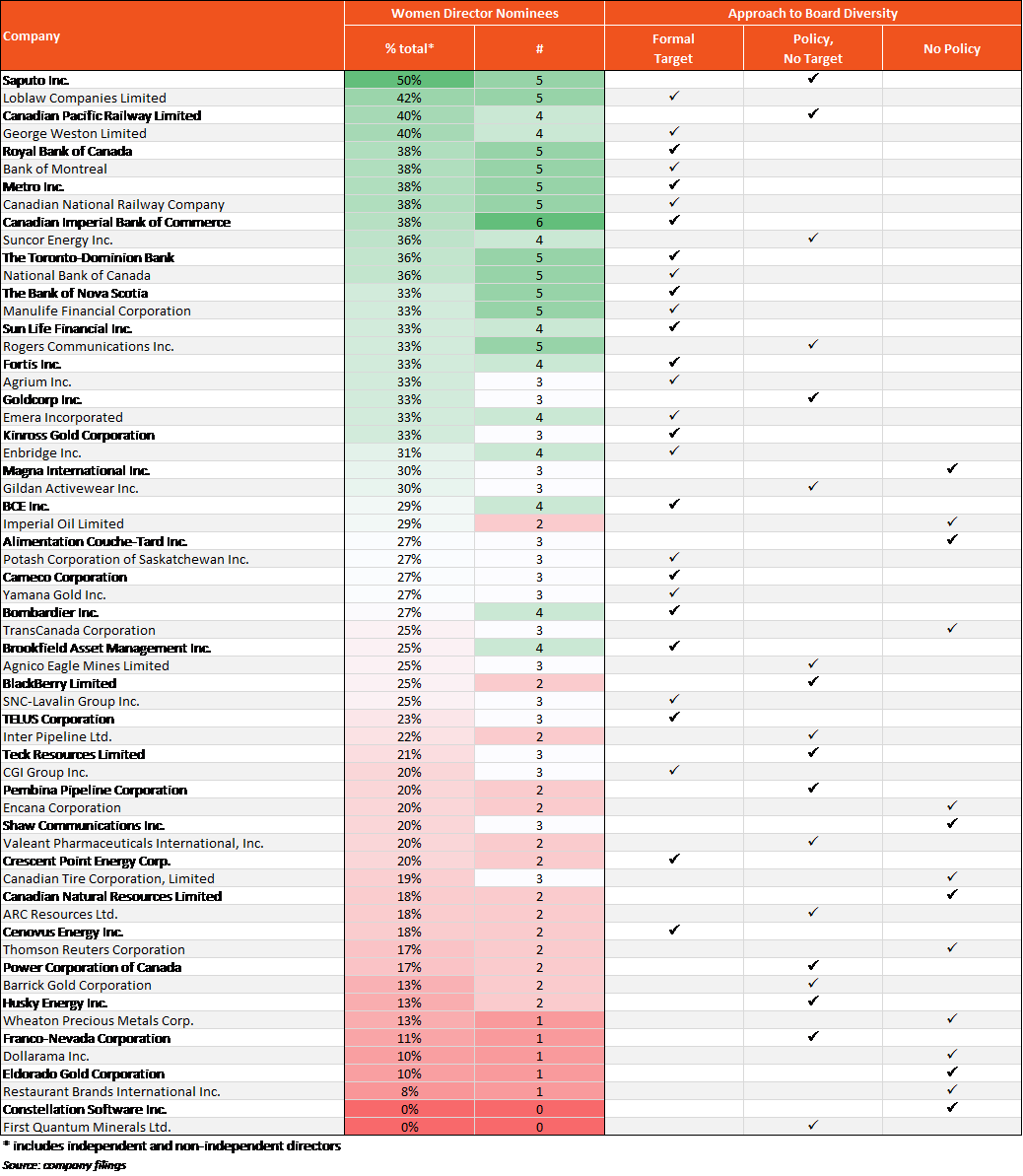 Do Gender Quotas Make a Difference?

At first glance, it appears so. TSX60 issuers with formal board diversity targets have higher overall representation of women on their boards (31%) than companies with policies but no targets (24%), and those without a policy (18%).

What remains unclear is whether the adoption of formal diversity targets drives higher female representation on boards, or whether more women on a board makes it more likely for an issuer to adopt a formal diversity policy and/or target. What came first – the chicken or the egg?

Unsurprisingly, board gender diversity varies (sometimes significantly) by industry. In 2017, Consumer Staples companies in the TSX60 had the highest overall proportion of women on their boards (39%), followed by Utilities (33%) and Financials (32%). The lowest proportion of women on boards were in Information Technology (16%), Consumer Discretionary (19%), and Healthcare (20%). 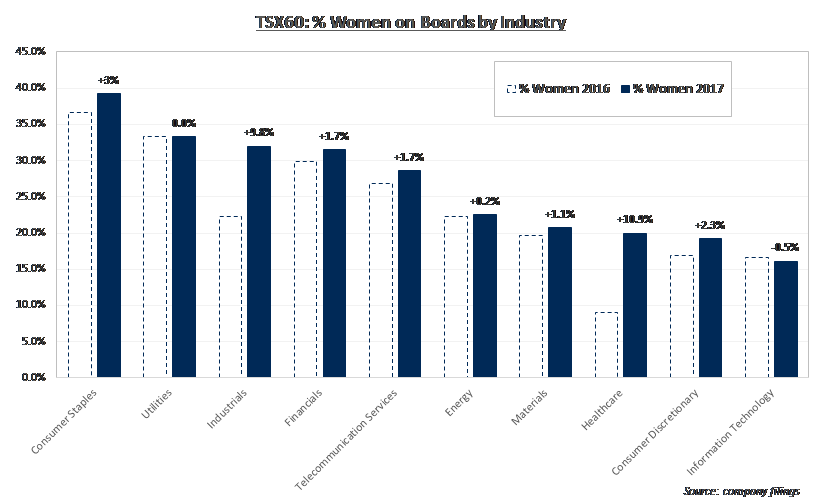 Since 2016, the largest gains in female representation were seen on boards of Healthcare (+11%) and Industrial (+10%) companies. Information Technology saw a small decrease in women nominees year-over-year (-0.5%).

While there has been an increase in the overall representation of women in Canadian boardrooms over the last decade, the rate of change, and progress towards parity, remains slow. Among TSX60 companies, the presence of a formal board diversity policy and/or specific gender quota appears to be one factor driving up female representation on boards. It is worth noting, however, that even where specific quotas exist, both the targeted level for female representation and the actual proportion of women serving on boards continue to be a long way from equality.

All signs point to a continuing trend towards adoption of formal gender diversity targets, amid mounting pressure from the shareholder community, ongoing media scrutiny, changing societal expectations, and an ever-growing body of research demonstrating the business case for gender equality.

Moving beyond gender, we expect to see discussions around boardroom and executive diversity increasingly encompass a broader definition of “diversity” – i.e. considering differences attributable to age, ethnicity, background, experiences, and so forth.