The 2021 proxy season took place in context of an unprecedented pandemic and offered shareholders a unique opportunity to express their views on executive compensation decisions. While most Canadian companies continued to experience high shareholder support for their advisory vote on Say-on-Pay (SoP), there was a record number of six failed SoP resolutions1. These were largely driven by a perceived misalignment between executive pay and the experience of shareholders. While pay-for-performance alignment is widely viewed to be a key driver of shareholders’ acceptance of a company’s approach to executive compensation, a common criticism is that SoP is a de facto “say on performance” vote. Hugessen has analyzed SoP results over the past five years to identify the extent of the relationship between SoP support levels and total shareholder returns (TSR). 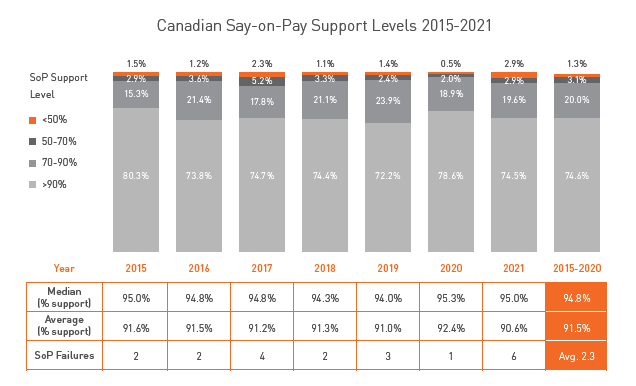 Six out of 204 Canadian companies2 (2.9%) in 2021 failed their SoP vote, which represents a significantly higher proportion than the average over the previous six years of 1.3%. All six companies had experienced negative TSR in the calendar period preceding the shareholder vote on both 1-year and 3-year basis. They had all received an “against” voting recommendation from ISS in 2021 and were flagged for a high degree of concern on pay-for-performance alignment. Four of the six companies also received an “against” vote recommendation from Glass Lewis in 2021. 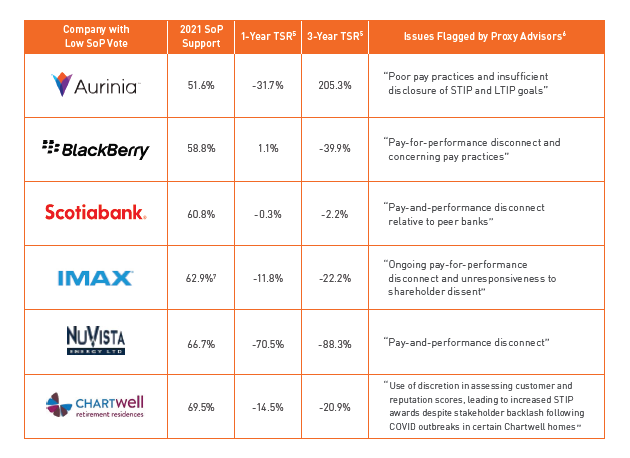 A common criticism of SoP is that it is a de facto shareholder “say on performance”. Those who make this argument will refer to examples of companies that have been perceived to have “excessive” levels of executive compensation, but nonetheless garner broad shareholder support for SoP due to strong performance. Conversely, some companies that have historically received strong support for their executive pay programs have experienced a precipitous decline in SoP support when performance is weak.

Hugessen has analyzed the SoP results of all Canadian issuers over the past five years and compared their voting results to absolute TSR over the preceding three years. We observe three notable trends:

Say-on-Pay provides shareholders an opportunity to voice their views on a company’s approach to executive compensation. Notwithstanding the impacts of COVID-19, shareholder scrutiny continues to be focused on outliers. The median level of SoP support in 2021 remained flat year-over-year at 95%, which suggests there was no broad discontentment in the market on executive pay. A historical analysis of the relationship between SoP support and absolute TSR indicates no statistically significant relationship between the two. However, a strong absolute TSR has demonstrated to greatly reduce the likelihood of low SoP support. Companies with weak performance can undertake strategies to bolster shareholder support for SoP including through pay structure and design decisions, and enhanced disclosure of the rationale behind the company’s approach to executive pay.

2 Say-on-Pay data as of September 2021; sample represents Canadian companies that have held a SoP vote in 2021

7 IMAX Corporation is a Canadian-headquartered company listed on the New York Stock Exchange. The company is not classified as a foreign private issuer in the U.S. and is subject to U.S. voting guidelines by the proxy advisors